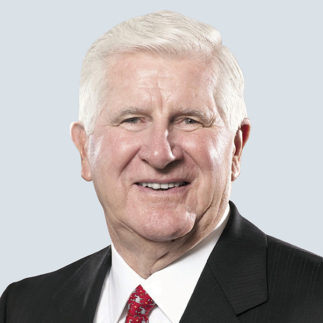 Joseph Buckelew is Chairman of Conner Strong & Buckelew with offices located in New Jersey, New York, Pennsylvania, Delaware and Florida. Conner Strong & Buckelew serves the insurance, risk management and employee benefits brokerage and consulting needs of clients throughout the United States and abroad. He has held prominent roles with this and predecessor companies since 1959.

Buckelew was also one of the former owners and founders of Ocean Cablevision which merged with Monmouth Cablevision and ultimately was sold to Clear Cable. In addition, in 2012, Buckelew and other local business and civic leaders purchased Interstate General Media (IGM), the parent company of the Philadelphia Inquirer, the Philadelphia Daily News and Philly.com. In 2014, Buckelew sold his shares to the minority owners.

As a longtime Lakewood resident, Buckelew has served as Lakewood Mayor, Police Commissioner and a member of its Township Committee as well as on the Ocean County Board of Freeholders. He also was one of the founding members of WOBM, a radio station formed in the early 1960’s.

His deep-rooted ties to the community have earned him numerous honors, including a Distinguished Citizen Award from the Jersey Shore Council of the Boy Scouts of America, a Good Scout Award from the Ocean County Council of the Boy Scouts of America, a silver Gull Award for Business Achievement from the Monmouth-Ocean Development Council and a Humanitarian Award from Ocean County College Foundation. Buckelew received a Doctor of Humane Letter honorary degree from Georgian Court University and a Doctor of Public Service honorary degree from Monmouth University. Lastly, his most recent honor in 2018 was his induction into the New Jersey Hall of Fame.

He and his wife, Carol (deceased), were married for over 60 years. They have two sons, Brian and Kevin, and six grandchildren.