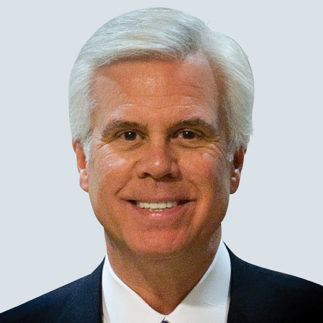 GEORGE E. NORCROSS, III serves as Executive Chairman of Conner Strong & Buckelew, among the nation’s largest insurance, risk management and employee benefits brokerage and consulting firms and operates in all 50 states. Norcross has been the head of Conner Strong & Buckelew and predecessor companies since founding the firm in 1979 in a basement office in Camden, New Jersey.

Norcross also serves as Chairman of the Board of Trustees of the Cooper Health System, Cooper University Hospital, and MD Anderson Cancer Center at Cooper, all in Camden, NJ. He has served as a Trustee of Cooper University Hospital since 1990. Under this leadership, Cooper has grown into a top-tier academic health system and is the only state-designated Level 1 Trauma Center in South Jersey, with a total of 10,000 employees across the region. Annually, nearly two million patients from across all 50 states and 35 countries visit Cooper’s 800-plus physicians practicing in 75 specialties at more than 100 convenient medical offices and three urgent care centers. As Chair, Norcross led Cooper as it launched the Cooper Medical School of Rowan University, the first new medical school in New Jersey in 30 years and opened the MD Anderson Cancer Center at Cooper.  In September 2022, Norcross announced a new $2 billion expansion, the largest development project in Camden County’s history, which will dramatically expand the academic health system’s Camden campus to meet the current and future projected demand at MD Anderson Cancer Center at Cooper and Cooper University Hospital.

In addition to his roles at Conner Strong and Cooper, Norcross has been recognized for his personal philanthropy and support of the larger South Jersey community, especially the City of Camden. Through Norcross’s family foundation, and in partnership with Conner Strong & Buckelew and the Cooper Foundation, Norcross focuses much of his charitable efforts on improving education for youth, funding research to help cure diseases, supporting the arts and culture, improving the community’s safety, and helping people with disabilities in the Camden area. Over the last decade, the groups have collectively donated to more than 500 groups across the region and state.

In connection with his leadership at Conner Strong & Buckelew, Norcross and his family made a significant investment in BroadStreet Partners (“BroadStreet”), and Norcross has taken on the role as Vice Chairman.  BroadStreet is majority owned by the Ontario Teachers’ Pension Fund. In 2022, the Norcross family purchased the iconic Formica’s Bakery, a South Jersey institution and baker of the “World Famous Atlantic City Bread”. He added Freitag to the company to honor his great grandfather’s legacy as a baker in Camden. Norcross also serves on the Board of Directors for the Coriell Institute for Medical Research and Holtec International, a global leader in power generation technologies.

He formerly served on the Board of Directors for Delta Risk, a firm that provides high impact cybersecurity and risk management services to government and private sector clients worldwide and on the Board of Directors of Commerce Bancorp, Inc. (NYSE:CBH) and as Lead Director of the $7.8 billion sale of the bank to TD Bank Financial Group. Norcross was Chairman and majority shareholder of U.S. Vision, a large national retailer of optical products and services, which he later sold. In 2012, Norcross and other local business and civic leaders purchased Interstate General Media (IGM), the parent company of The Philadelphia Inquirer, Philadelphia Daily News, and Philly.com, the region’s largest and most popular online news source. In 2014, Norcross sold his shares to the minority owners.

Norcross was named a 2020 “Champion of the C-Suite” by ROI-NJ for “making the impossible possible” and the 2018 Business Leader of the Year by the LeBow College of Business at Drexel University for his successes as a business and community leader.

Norcross has won wide praise for his leadership of Cooper and has been repeatedly named one of New Jersey’s top healthcare leaders by NJBiz, recognized as one of New Jersey’s Top Influencers in New Jersey Biotech by BioNJ, Trustee of the Year by the New Jersey Hospital Association, and Trustee of the Year by the New Jersey Council of Teaching Hospitals. For his leadership in creating Cooper’s Veterans VIP Priority Program, Norcross was awarded the prestigious Seven Seals Award given by the U.S. Department of Defense’s Employer Support for National Guard and Reserves. Norcross accepted the Susan G. Komen Beacon of Hope Award on behalf of Cooper University Hospital/Cooper Cancer Institute.

Norcross serves as chair of The Cooper Gala, which is one of the largest single event charity fundraisers in the greater Philadelphia-South Jersey area each year and has raised almost $25 million to benefit Cooper University Health Care, including a record $3.5 million in 2022. In addition to supporting The Cooper Foundation, Norcross committed $5 million to Cooper as the first commitment in a $50 million capital campaign to help fund the rapid expansion of one of New Jersey’s preeminent academic medical centers. He and his family have also helped fund scholarships for medical students in need from Camden County to attend the Cooper Medical School of Rowan University.

As part of his leadership role in Camden, Norcross serves as a member of the Board of Directors and the Executive Committee for the Camden Community Partnership, a private, non-profit corporation dedicated to planning and implementing high-quality urban redevelopment projects to revitalize the City of Camden. To increase employment among Camden residents, Norcross led the creation and funding of Camden Works, along with NAACP, Latin America Economic Development Association, Center for Family Services, Hopeworks and Camden County Workforce Investment Board.

The United Way of Greater Philadelphia and Southern New Jersey awarded Norcross and his family the Haas Regional Champion Medal for their commitment to the United Way’s mission and for embodying the entrepreneurial spirit of the legendary philanthropist, John Haas. Norcross has been honored by the New Jersey March of Dimes at the organization’s Born to Shine Gala and by Chabad Lubavitch, awarded the Annual Champion of Children Award by the Camden Children’s Garden and the Tree of Life Award from the Jewish National Fund for his philanthropic and community leadership.

In partnership with AmeriHealth New Jersey, the Cooper Foundation and the Norcross Foundation he founded and provided $1 million to create the Camden Health and Athletic Association (CHAA) to expand youth sports programs and health initiatives in the City of Camden. Since its kickoff, CHAA has helped more than 1,000 Camden children participate in more than 30 sports programs across Camden.  Conner Strong & Buckelew was a founding sponsor of a $1 million grant program for Camden City based non-profit organizations committed to making Camden a healthier place to live, work, learn and play.

Norcross has been a long-time benefactor of the Larc School in New Jersey, a special education school for children with disabilities, and he and his family were recognized for their commitment at the school’s 50th anniversary in 2018. His involvement includes serving as Chairman of the Cooper Norcross Run the Bridge, the largest 10K run in the tri-state area and the Larc School’s most significant fundraising event. Through the Run and other initiatives, Larc School has been the beneficiary of over $5 million in fundraising dollars.

A student of history who has visited almost every presidential museum, with his family, Norcross purchased a rare copy of the Declaration of Independence in 2021, which is being lent to the Museum of the American Revolution in Philadelphia, to be displayed beginning in the spring of 2023. It will also be displayed at Cooper Hospital.